Passengers travel by train for about $9000 each, again influenced by distance travelled. It’s not too hard to make money with passengers between towns and probably that is the next thing to do, so that you have a stable high-margin income source.

The number of passengers that want to travel is another supply and demand system, again limited by trip time. Passenger lines, I find, are more sensitive to trip times than freight lines. You pretty much have to keep your round-trip time on a passenger route to right around six minutes which permits two round-trips per year.

Go back to your high-population town that you build the freight line for and look around for the closest town that does not have a mountain in the way of your new railroad. Ideally, try following a river valley or crossing a level plain. Lay the track, then add your passenger stations on sidings. For track, as soon as you can build high-speed rail, do so. A single 200kph – 300kph bullet train doing six runs of 60+ passengers a year between two towns make an awful lot of money. Six individual trains pulling the same number of passengers at 120kph will loose money in operating costs faster than you might imagine. 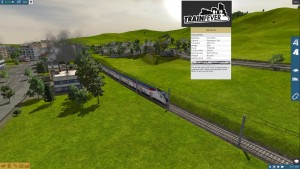 Train Fever: The Bombardier DUALSTOX is an excellent piece of kit … the same price as a building an 88-passenger train from rolling stock, but with 142 passenger capacity and greater acceleration … I’ve seen these on my longer routes hitting 180kph.

I go electric high speed for passengers, and diesel low speed for freight. It seems to work well.

Use the same criteria for station sizing as for freight. However, if either town is in the middle third of the map, and there are other “obvious route” towns, buy a station that has a track for each potential extra town line that will come in here. In my current play-through, the two central hub towns have four and five track stations, respectively, servicing eight passenger lines.

Why build big now? Land developers will start building as close to your stations as they can get. When you need to expand, you might find yourself having to spend several million dollars in demolition fees to bulldoze buildings that are sitting right where you need to run a million-dollar-a-year bullet train line.

Now open the information panes for the two towns by clicking on the name of the town on the map. Put them side-by-side, and start comparing.

So, here is an example:

If your route runs every six minutes, then you need a train that will move 60 passengers per trip.

Once you’ve worked out what your traffic expectations between your two towns are, save your game. Now, buy your train, add your passenger cars and build your line between the two. As before, monitor the line, adjust the train size for the reality of the run time and go.