As I noted in my video blog post in April , one of the mistakes I made was not understanding the best way to plant my grow beds. For much of the life of the system, the entire thing has been dominated by a forest of 60 cm (28 in) tall pepper plants. This shaded out everything else I planted; we got a couple of beans and a radish before the Great Pepper Rainforest blotted out the sky and cast everything beneath into deepest shadow. 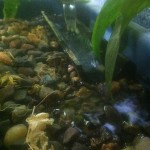 Deep In the Pepper Tree Forest

The other thing I didn’t clue in on was that peppers are tropical plants. The will not set fruit if the nighttime air temperature drops below 16C (61F). At night during winter, our basement auto-learning thermostat drops the air temperature to 14C (57F). So, that’s strike one against us.

Next, it turns out that peppers are sun-worshiping plants. That massive set of 230 LEDs I have overhead? Not enough. I would need to essentially double the amount of light for them to set fruit. Strike two.

Lastly, it turns out that peppers are used to growing in poor soil. An abundance of nitrogen in the environment tells the plant to put all of it’s effort into an abundance of green foliage. Unfortunately, because my system is relatively “small”, my parts-per-million of nitrate in the water is quite high … which means a nitrogen (N) rich environment. Strike three. 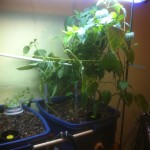 So, while the plants are almost always covered in an abundance of blooms, we have yet to get fruit. On the other hand, I have ridiculously lush and healthy 60 cm (28 in) tall pepper plants! So, at the beginning of June, I transplanted one full grow bed of peppers out into the family dirt garden. I was fully expecting them to become fruitful within a couple of weeks.

On the 6th of June, three days after transplanting, we had a night where the air temperature fell below -3C (27F). Jack Frost killed almost everything we had in the garden, including my six or seven green peppers plants.

A frost … in June.  Jokes about the Great White North are now permissible.

Oh well. Back to the grow beds.

One of those things you have to be conscious of is that the “benign” nitrate (NO3) in the water will actually become toxic to fish beyond a certain parts-per-million (PPM) count. As an aquaponic gardener, you are dependant on having a hungry set of plant roots in the “wet zone” of the grow bed, constantly consuming the nitrates in the water. By removing half the green peppers in my system, I have now removed half the nitrate consumers.

If I’d left it like that the swelling nitrate concentrations would have killed the fish.  The lack of fish would have zeroed the constant supply of ammonia into the water.  With no ammonia, the strains of beneficial bacteria in the gravel beds that convert ammonia to nitrite and then to nitrate would have starved to death.  With them starving to death, they stop producing food for the plants.  Then the plants die.

In the aquaponics world, this is called a “crash”.  Crashes are bad.  This is just one way to crash your system.

So, I relocated half my goldfish and minnows from my aquaponics fish tank to my recreational fish 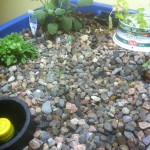 In the now vacant grow bed, I planted kale and lettuce seeds, as well as two commercially bought herb plants — sage and basil. Improbably enough, a lone strand of celery from the initial planting had survived the Long Dark Pepper Night; I decided to leave it there to see what would happen.

That’s it for this post! As always, comments and suggestions are welcome!