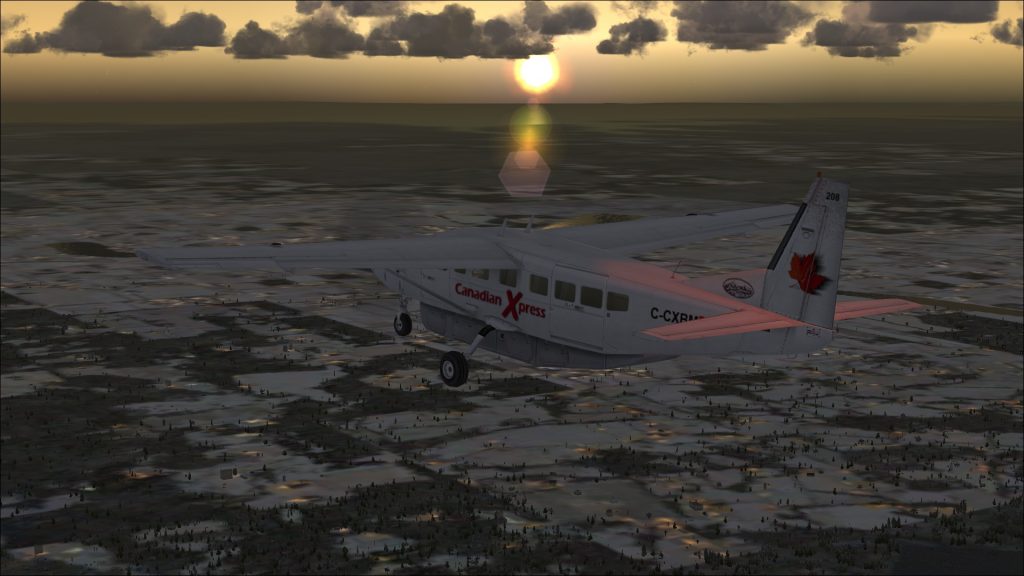 Tried landing with a 38 km/h tail wind. Now, I know that there are very good technical reasons why you shouldn’t do this. But one of the great things about a sim is that experimentation is never expensive or fatal.

Runway “07” on “Les Îles-de-la-Madeleine” is diabolically short. It’s clearly intended for STOL aircraft. The Cessna 208 Grand Caravan isn’t a particularly heavy plane, even with 3/4 tank of gas and 5 people on board.

However, a 38 km/h tail wind changes everything. Even with full flaps and careful fussing with the throttle, it was just impossible to get on the glide path. The visual aides near the side of the runway were perpetually “4 whites”; meaning I was too high. However, backing off the flaps or throttle resulting the plane dropping rapidly, giving me “4 reds”.

I crossed the threshold with 100′ of altitude to spare, and nothing I did was going to result in a safe landing. So, flaps up and throttle up, and headed out on 070 for four minutes, and then turned around.

Now facing the “07” runway from the opposite direction of 250, my nose was into the wind. It was relatively easy to keep on glide path, about 10 knots above stall speed with 20% flaps. The visual aides showed “2 whites, 2 reds” the whole way down, and flaring out and touching down was comparatively painless.

The only flaw was that the wind wasn’t really on the nose, and instead to the ahead-right. This pushed the a/c to left and I was noticeably off centre on wheels-down. Still on the runway, but not ideal.

CYGR is a pretty spot in the FSX/SE world. With the sun just having fully risen, and the weather a mix of clouds and flurries, it was visually very nice. I’ll likely add that as one of my longer routine runs; it takes about an hour to fly to.