Searching for 600 – My Experiences With A Rocket Mass Heater

In my last blog post, I talked about why it was I made the decision to try and build a Rocket Mass Heater system for my aquaponics greenhouse. I also talked about how my first attempt at building one worked out, and what I learned. From that, I ultimately decided to try again, and pressing the edge of what I knew to get where I wanted to go.

In this post, I want to discuss how Rocket Mass Heater (RMH) systems work, what the key components are, and the crucial math that drives these fascinatingly simple yet efficient combustion systems.

Wood smoke is unburnt fuel that is being wasted.

Solids do not burn; vapour burns. So, when you “burn wood”, what you are really burning a complex brew of things lumped together under the term “wood gas”. As heat is applied the flammable compounds in the wood “boil off” in a process called pyrolysis.

Heated gases behave like fluids, and will develop “layers” that do not mix. So, you can have a layer of burning gas in a flow, with a layer of cooler air right beside it, both moving through the exhaust piping of a combustion system, and they will not mix. That means that as soon as the oxygen runs out in the burning gas, combustion stops, and any unburnt wood gas stays that way. Any heat contained in the wood gas begins convecting and radiating out of the gas, and its temperature starts to drop. If the temperature drops below 235° C / 450° F, then it condenses as the substance known as creosote (aka “chimney tar”).

As anyone who as ever seen a chimney fire can attest to, there is a lot of energy / combustion in creosote. By definition, that is fuel that you paid for that you do not get to burn. Rocket Mass Heater systems are designed to force that fuel to burn before it leaves the chimney.

A chimney is an upwardly angled conduit that channels exhaust gases away from a source of combustion. They are dependant on a pressure difference existing at each end of the conduit. At the base must be an area of high pressure and temperature; at the top, an area of comparatively lower pressure and temperature. The high pressure, high temperature gases move towards the low, drawing new air into the base of the chimney (called the “stack effect”).

A Thermal Siphon With No Moving Parts

The most simple and yet most jargon-laden explanation for how Rocket Mass Heater systems work is that they are thermal siphons powering wood gas burners. A fire burns in the burn tunnel; stack effect pulls the combustion gases as well as more air strongly out of the combustion area as two divided streams. It then forces these two streams to recombine, causing a second, much more energetic burn. This causes a surge in temperature and in gas volume, rushing the now completely burned exhaust out of the chimney, intensifying the power of the stack effect.

The longer it runs, the hotter it gets, the faster the gases are moving and the more complete the combustion. At one point, the process does reach a cap imposed by physics, but temperatures in excess of 1200° C / 2200° F are not unheard of inside Rocket Mass Heater systems.

Since the objective is to feed the “afterburner” of the Rocket Mass Heater, we want two things to happen here. Firstly, we want lots of air able to get into both the top and bottom halves of the adjacent Burn Tunnel. Secondly, we want to expose as much surface to the radiant heat coming from the Burn Tunnel as possible, to start producing wood gas.

“J-tube” systems are gravity fed; the finely split, tall pieces of firewood are placed standing straight up and down in the Feed Tube. Air moves downwards, pulled by the vacuum being created “down stream” in the Burn Tunnel and then again in the Heat Riser. As the tips of the fuel sticks burn, the wood sinks into the Feed Tube, keeping the fire burning.

This area should be at least partially insulated so that any radiant heat from the Burn Tunnel does not easily escape and can be used to pre-heat the air flowing from here into the Burn Tunnel. 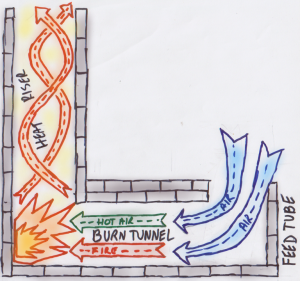 The Burn Tunnel is perfectly horizontal, and runs between the Feed Tube and the Heat Riser, which join to it at vertical right angles.

This is the heat source for the creation of wood gas, as well as ensuring that the temperature of the combustion gases and unused air that are flowing into the Heat Riser are well over 595° C / 1100° F.

Insufficient insulation of the Burn Tunnel, particularly the roof, is a common source of under-performance in Rocket Mass Heater systems.

At least 50mm / 2in of fire brick, or double that of clay-perlite mix, is strongly encouraged for the Burn Tunnel roof. At least 25mm / 1in or equivalent thermal insulation for the walls and floor are also needed.

The thinner the insulation here, the longer it will take to get the combustion temperatures in this area to cross the crucial 595° C / 1100° F line. The longer that takes, the more fuel and heat you are wasting. If too much heat is wicked away and you never cross that line, you never get the second stage burn.

Heat Riser (AKA: the chimney)

The union of the Heat Riser and the Burn Tunnel is a 90 degree turn upwards. This is important, because it is this sudden, sharp turn that triggers the second stage of combustion within the Rocket Mass Heater — the “afterburner”, if you will.

As noted above, at the speed and temperature of these two streams actually keeps them from combining. The are moving horizontally too quickly to be able to mix vertically. Then, they slam into the vertical back wall of the elbow which forces these two streams to mix.

In Rocket Stoves and Mass Heaters, You Need To Cross The Streams

This sudden turbulent combination the hot and fuel-rich wood gas with the hot oxygen-rich air provides ideal conditions for self-ignition of the second stage of combustion. The remaining 60% of the wood gas combustibles, those that only ignite above 595° C / 1100° F, explode hitting temperatures in that can reach past 1200° C / 2200° F. Those are blowtorch temperatures.

This sudden surge in temperature drives an equally rapid expansion of the exhaust gas mixture. It then races up the vertical shaft of the heat riser. This process is where the real heat of your Rocket Mass Heater is created.

As this column of gas moves swiftly upwards, it creates a low-pressure zone at the union between the Heat Riser and the Burn Tunnel. This literally drags air from the Feed Tube through the Burn Tunnel to equalize the pressure.

Air will be moving so fast into the Burn Tunnel you can audibly hear a roaring noise, not unlike watching a NASA or Roscosmos launch on TV. It is this sound that gives the Rocket Mass Heater its name.

Here, again, insulation is paramount. It must me five to ten times hotter inside the throat of the Heat Riser than immediately outside it. If heat is being wicked away through the walls of the Heat Riser, then you are robbing the process of vital energy required to ensure that the “afterburner” lights up and burns properly.

At least 25mm / 1in of fire brick, or double that of clay-perlite mix, is strongly encouraged for the walls of the Heat Riser.

You do not want mass here, you want insulation. These are very different things, and if you can dramatically retard the performance of your Rocket Mass Heater if you confuse the two.