As I said in one of my YouTube Video Blogs (Aquaponics Build Update #8), I won’t be running my greenhouse aquaponics system over the winter.  So, instead, I’ve been working on a “Lake In A Box” prototype for an indoor system.

“Lake In A Box”, of course, is the quick-phrase I use to explain aquaponics to someone unfamiliar with it.  If you’ve seen a lake with plants growing in it, that has fish, you understand the rough idea behind aquaponics.  The fish waste is used by the plants to grow, which cleans the water for the fish.

I’m going to do a much more detailed “how I built it” post later on, but I wanted to put something here for now for posterity.   It’s a 50 gallon / 208L build;  so the water displacement moving through the grow bed every cycle is 50 gallon / 208L.  It is cycling about once every 20 minutes right now, so the water in the fish tank changes three times an hour. 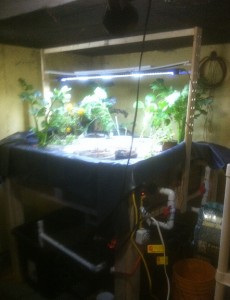 Lake In A Box Prototype 1

The system was running over night  last night with a couple of fish in it (relocated from outdoor system) for the first time. The timer had turned the lights on at 8am, so when I went down to check on it this morning everything was bright and cheery. So, it starting to get to an autonomous state.

I think I’ll wind up replacing the bin I am using as a fish tank with once twice the size on Friday … I’m not happy with how little freeboard I have during the “drain” phase of the cycle right now.

I’m already mentally working on the change list for Prototype 2.  Now that I’ve had a chance to see how this one is part of a work space and work flow, there are a couple of things I’d like to change.

I planted Sweet Basil, Grand Rapids Lettuce and Bright Mix Mesclun in the system last evening. So, by mid-January, I should have a nice salad garden in combination with the Bok-Choi, Kale and Celery that is already there.  One of the benefits of aquaponics is that they are pretty close to organic growing systems, by default.

I’ll post another update once I have more news to share.  All the best, and I’d love to hear from readers if they have an indoor system of their own, or are planning on building one soon.