Late to the Train Fever Party 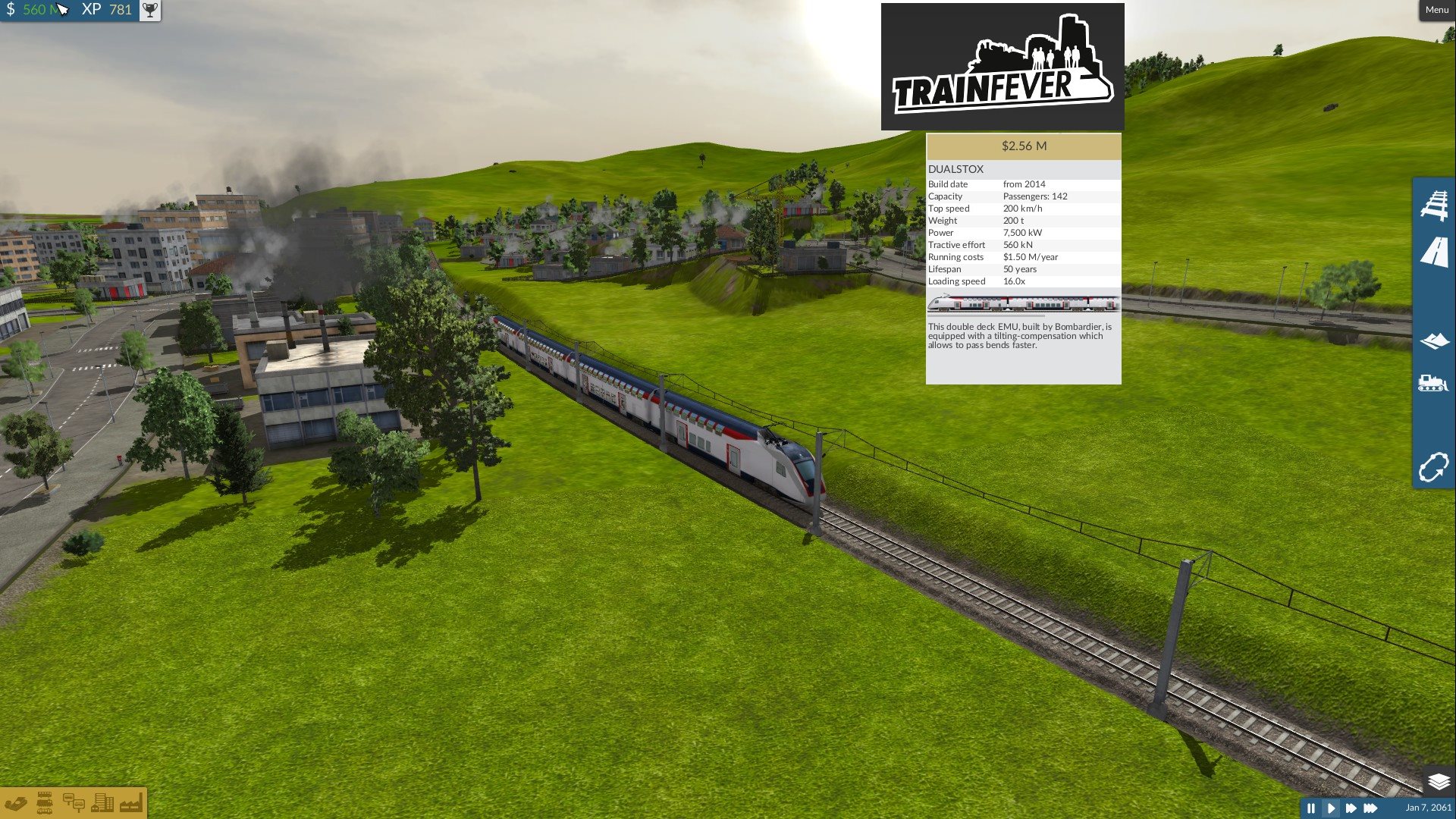 Late to the Train Fever Party

With a name like Train Fever you’d think this is a game about building giant virtual train sets under the restrictions of meta-economy. You’d be wrong; so was I.

Train Fever, in fact is a ground transportation management simulator. The simulation component is a bit counterintuitive, and if what you’re here for is to build a model railroad, it’ll bite you as it did me.

If I have a primary complaint about Train Fever, it is that for a game that is still $40 CAD a year after its release, the help / tutorial is functionally non-existent. For an early release game, that’s OK … for a “sim” game priced at the bottom edge of Triple A pricing a year into it’s life-cycle, not so much.

There are some good tutorials and such that the fan community have written. Unfortunately, most of them gloss over the detail about the meta-economic engine that drives the entire game. So, I’m going to talk about that a bit.

Don’t get me wrong … I very much enjoy this game. I’ve put over 140 hours into it. However, most of that time has been spent functionally trying to reverse engineer what the heck the game “wants” so that the economy will make it possible to build the sprawling train network I want. Hopefully, reading this will spare someone else that pain.

Towns are “sinks” for “Goods”. That is to say, that each town has a certain number of goods items that it consumes in a year of game time. A town that does not receive that many goods will not grow. The inverse is also true. Growth of a town increases the demand for goods and increases the number of passengers that are willing to travel between towns.

So if the tool-tip for a town says it has a Goods statistic of “30/50”, that means that in a year, local refineries are ship 30 units of Goods to the town. There is a further 20 units of unsatisfied demand. It this unsatisfied demand that we want to pay attention to.

So Towns consume Goods. What produces Goods? Good question, I’m glad you asked. In the Train Fever game-verse, there are Steel Mills, Lumber Mills, and Oil Refineries. Each of these produce a generic “Goods” item in direct proportion to the demand they have a shipping route to.

This is another important point. Two towns, with a demand of 60 and 40 Goods, respectively, can be serviced by a single Goods producer — it will scale up over time to produce the total 100 Goods required.

Conversely, the same two towns can be serviced by three or more different Goods producers. However, the total production of this group will never exceed 100 units of Goods.

This good to know, since it’s going to cost you money to build roads and rails to bring Goods to market. Given that you get just as much production from one location as from seven locations, it makes a certain amount of sense to keep your Good production location count as low as possible.

I think there is a functional cap of 400 units production from a single Steel Mill, Lumber Mill, or Oil Refinery. However, given that in my current play through my largest town has 650 people in it with a Goods demand of 85 units, essentially, this implies that a 3:1 Town:Goods Producer ratio is sustainable for quite a while.

Goods Producers require raw resources. Steel Mills require iron ore and coal from mines, Lumber Mills require wood from forests, and Oil Refineries require oil from oil wells. Again, a Goods Producer will try import as many of its required raw resources to enable it to meet the demand of the local town it is supplying. So, an Oil Refinery supplying a Demand:50 Town, will need 50 units of oil per year from oil wells to create the goods.

The only thing that reduces travel time is speed. This is a critical consideration in planning your rail network.

Thus, a train or truck route that takes six minutes to complete will get two full runs in per year. A three minute route will get four runs per year. An eight minute run will get 3 runs every two years.

This is important, because trains are expensive. Goods ship for an average $15k per unit, depending on distance. So, if your train is going to cost $700k per year to run, you need to ship 46 units a year just to break even. To do that, you’ll need a town that has at least 46 units a year of demand for Goods.

Resources ship for around $10,000 per unit, again influenced in some fashion by distance travelled — further seems to mean more revenue per unit. This is just based on observation of my own current play-through.

This in turn drives the size of our train. The fewer the number of cars on our train, the lower the running cost per year. The locomotive is the single biggest cost centre, but each passenger or freight car also adds to the annual cost of the train. Longer runs require more cars to ship the same number of goods in a year.

As time passes in the game, and newer locomotives become available they are almost always faster and more powerful. That means your run time will drop, shaving minutes off the route. Likewise, freight car capacity will increase. Keep an eye on this; you may be able to cut the size of your train after an upgrade, thus reducing the operating costs and in turn increasing profits.

Howdy, everyone! My newest novel, “Afterliving for n00bs” comes out on the 2nd of Oct 2022. Boy meets girl, vampire meets werewolf, apocalypse cult tries to trash the city and don’t forget the Halloween party; it’s going to be a busy week. […]

MRV: Hi, Mandy! Thanks for taking a few minutes to talk with me and the readers at Split Horizons. AC: Thank you so much for the opportunity! I am always thrilled for the chance to chat with fellow authors and connect with readers. […]

Yeah, We Went There

Manage Cookie Consent
To provide the best experiences, we use technologies like cookies to store and/or access device information. Consenting to these technologies will allow us to process data such as browsing behavior or unique IDs on this site. Not consenting or withdrawing consent, may adversely affect certain features and functions.
Manage options Manage services Manage vendors Read more about these purposes
View preferences
{title} {title} {title}