The opening scene drops you in, feet first, into literary cold water. Three young ladies are out for a picnic in Regent’s Park and a large example of Canis Lupus drops in for tea. And then things get weird. 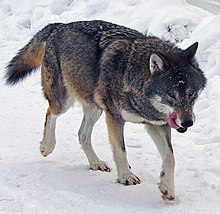 I wouldn't be sure it was tea it was looking for...

The writing in the opening scene is loaded with well paced pieces of detail that frame the time, place and culture of the story within just a few paragraphs. At the same time, they are never overwhelming or distracting from the flow the story.

It is rapidly established that Katie Harker, the daughter of the famous Jonathon & Mina Harker, is not your ususal Victorian flower. 15 years have passed since Bram Stoker published his documentary which forever changed the lives and fortunes of the Harker, Godalming, and Seward families.

The aging Dr.Seward is the guardian of the daughters of those three families. It becomes clear that the incident with the wolf has discomfited him, as though something like it had been expected.

From there, the story races on, developing a feel that the main character and her two friends are on a careening cart ride through the streets of London. Something is going on both around and to Katie Harker and no one seems prepared for any of it, least of all the girls.

The writing is a short-sentence style that is punchy and well delivered. The descriptions are concise and smart. This is cliff-hanger fiction that reads well and has the sense of running into a wall every time you get to the last page of an installment.

Save yourself the trauma, just get all three volumes at the same time, so you can just plunge off the tail of one into the depths of the next. Really.

If I have a complaint it stems from one paragraph on the second page of the first installment:

She was a clever girl, despite being only 20 years old, and was known among her circle of friends as an excellent problem-solver.

By the end of the second installment, the horror coming to roost amongst the three young ladies was rather apparent to myself as a reader. However, Katie was completely oblivious and clearly lacking a concerted attempt to deduce what was going on. She’s not slow; she’s just not as fast as the quote suggests she should be.

That said, as complaints go, its a minor one, easily swept away by a broom marked “self-denial”, of which we are all periodically guilty of. Beyond that, it is a great read and a fun read. The characters are well rounded, with distinct opinions and personalities.

I found the minor shift in point of view at the beginning of the third installment to be somewhat jarring. However, it was an effectively used tool to advance the plot in the reader’s eyes without letting the cat out of the bag in front of the protagonist. The cottage scene fringes on proper horror without tipping over the edge.

The Steampunk elements of the story are thin thus far. There are a couple of nods to the genre en passant, but if you miss them, you aren’t missing the story. I’m looking forward to seeing what more of this aspect of the story develops.

All in all, I’m happy to recommend this series to anyone who is an “old school” fan of vampires or loves a Goth/Victorian aesthetic to their reading. I’m two for two on that count, so I’m a happy reader.

Take note! Author S.L. Schmitz is running a book give-away. Leave a comment here about this review with your email address and on the 1st of February, she’ll give away two copies of the first three volumes of “Mina’s Daughter…The Harker Chronicles”!