When you are setting up a table-top game of any kind, as the Referee and /or Story Teller, you have a lot of design decisions to make. Tone, of course, is also important. So are setting and plot. These all define the very experience that the players are going to have. However, one of those qualities that tend to get missed is the level of emotional investment that the players should have in their characters.

Some Table Top Character Gaming systems (TTCGs) are incredibly casual about character death. RECON, I’m looking at you. Cyberpunk 2.0.2.0, don’t think I can’t see you over there, either. When the guns start firing, characters start dying.

Some will kill your character in the process of -making- your character; Traveller “Black Book”, anyone? However, once your character is created, you are largely safe from most things other than stupidity. The Shadowrun gaming system murders stupid ruthlessly, but it’s default setting verses the players is “emotional torture”.

Other games eschew deadly combat almost entirely unless the players go looking for it. The Champions super-hero rules are glorious “Golden Age” comics; lots of sock!-blam!-pow! and practically no “we regret to inform you”. 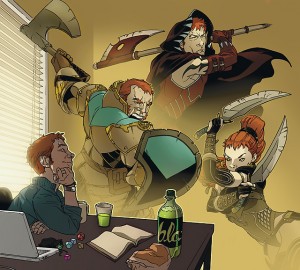 Some gaming systems leave the balance of lethality largely in the hands of the Game Master (GM). The system is as deadly to the characters as the GM wants it to be; a function of encounter scale and ruthlessness of enemy tactics. A good example is Dungeons and Dragons, 5th Edition.

In these systems, the GM needs to make sure the players understand how the GM plans on running the game. Is character death a show-stopping event, where the moment will be sung of in legend? Or is this a game where most well-intentioned adventurers never live to make it to their third season of travels, dying miserable and anonymous in a dank hole in the ground?

In more extreme words, is this an invested roleplay game, or a slasher movie? It is an important decision to make and –communicate– because it tells the players how much of a damn they should give to their characters.

If you are someone like me, a character in an invested roleplay game is actually important. It is the focus of the experience; what does that character feel? What strikes wonder in their heart? Or sorrow?

Alternately, if I know that the character is ultimately a camera position in a large story to be told across multiple characters, then I will focus on other aspects of the game. The larger world and why it is the way it is, for example. I won’t put the same effort into defining the personality of the character, and instead, more energy will go into the bigger picture.

I was recently playing in one of the DnD5e games I am in, and 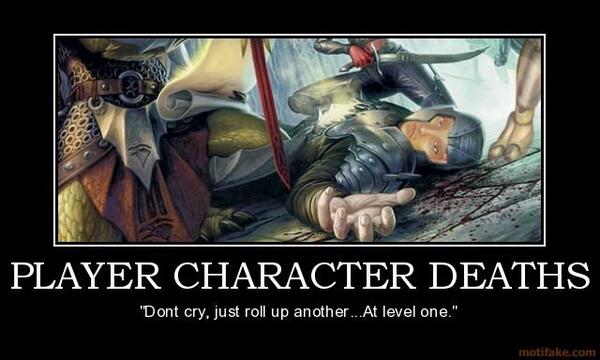 had a fairly negative experience because of this gap in expectations. I know the GM fairly well, and I know he likes emotional and character-driven games. So, my expectation was that this was going to be an invested roleplay game.

However, when a -player- did something daft during the session, the GM opted to force a mechanics / house-rules statement that would have likely killed the entire group. We got lucky and were able to salvage the situation, and fortunately, no one lost their character.

At this point, I personally have a dozen hours invested in this game and the character I am playing. I know at least one of the other players at the table also heavily invests in the “role-play” aspects of the gaming experience. I was pretty unhappy with the situation; the GM essentially served us notice there was no point in getting deep into our characters because he was willing to wipe the entire group to make a statement.

I knew that this was a gothic horror theme and setting. However, generally, DnD is a heroic fantasy setting; the good guys and girls usually come out on top. If I had known that the GM was actually considering the characters part of a medieval survival horror game, I likely would have hesitated in joining the game. Or, at least, not have worried about sorting out a good backstory and set of motivations for the character.

So, if you are considering running a game, or you are currently running a game, take a minute and make the conscious decision about the balance of lethality and level of investment that the players should have. Make sure you -tell- the players where on the scale they are. It will improve the gaming experience for everyone.