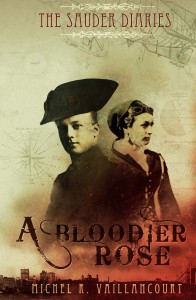 After a bit of tumultuous trip, the second book in my “Sauder Diaries” series, titled “A Bloodier Rose” is now available via both Amazon.com

and Smashwords.com. In addition, the Print On Demand (POD) service CreateSpace.com has the trade-paperback edition ready to get you your print copy within two weeks of order; either directly to your door, or via your favorite indie bookstore.

It’s been a bit of a slog, and I’m happy this one has been put out the door. For those of you new to the show, I started working on “A Bloodier Rose” a year ago, as part of NaNoWriMo. My observations on the process can be found in this blog post. While I very much enjoyed the social aspect of meeting up with local writers and sharing our experiences, at the end of it, I really wasn’t happy with the results. That section of writing accounted for 2/3 of the editing and re-writes.

Don’t get me wrong. I think every aspiring writer should try  NaNoWriMo at least once. See if it fits. See what you learn about yourself and your craft. In my case, however, it’s not a useful tool.

After NaNoWriMo was done, and Christmas 2011 had come and gone, my writing project went off the rails as I was forced to pull my first novel, “The Sauder Diaries – By Any Other Name” off the shelves and sever my ties to my existing publisher. The messy story can be  read here if you are interested, but it was the right thing to do.

I spend the next six months re-editing and finding new artwork for “By Any Other Name”, and learning everything needed to bring the book to market myself. Finally, in June of 2012, I was able to put “By Any Other Name” back up for sale. The month of July was spent promoting the re-release and trying to get sales numbers that echoed the book’s former glory. “By Any Other Name” had spent the last two weeks of December and the first two weeks of January in the Amazon “Hot New Releases in Epic Fantasy” list, hitting #33 in a mere five days after release.

Once August had arrived, I was able to get back to a regular writing schedule on “A Bloodier Rose”. I pretty much had to re-read and re-touch everything I had done to date so that there was some solid continuity in the story “feel”. While “A Bloodier Rose” can be described as two stories that share the same contiguous timeline, I didn’t want it to feel like the second half of the book had been written by a different author.

Then I had to put everything I had learned in getting “By Any Other Name” back on the shelf into doing the same with “A Bloodier Rose”. I was blessed in being able to work with the same artists for the cover and inside art. Details like that help establish the books as a series in the eyes of the fans, and I knew it had to be right or not at all.

I had to shift the publishing date back twice to be sure that everything was spot on. As always, my “hit team” of editors and beta-readers did a wonderful job, in spite of how long this project had dragged. They earned thier spot in the dedication.

So, on the 26th of October, 2012, “A Bloodier Rose” was generally available for sale on  Amazon and Smashwords. There was a minor snarl at Amazon which prevented it from being listed on my author page, which unfortunately confused a few fans. It was all straightened out by Amazon support by the next morning.

I held a modest Twitter release party and gave away a couple of cover-art posters from the Zazzle swag page, as well as a couple signed copies of the book. Sales have been brisk so far, and I’m waiting for the first couple of fan reviews to come in.

November is here, and with it another NaNoWriMo. I’m calling a pass on it, but even so, I’ve started laying out my next Steampunk themed novel. Details will come along as soon as I make the emotional commitment to writing it, but I’m liking where the story-boarding is going.

If you pick up a copy of “A Bloodier Rose”, do me a favor and let me know what you think. It’s a big help to hear from the readers and fans.