If you’re looking for sweetness and light in your reading, then don’t look for it in Alison DeLuca’s “Devil’s Kitchen”. This is what happens when Wells, Dickens and Faust have an agreement about what a Victorian dystopia should look like. I’ll stop here and tell you that, as with any proper Steampunk-esque adventure, the Good Guys do eventually win and the heroes of the story are the Good Guys. 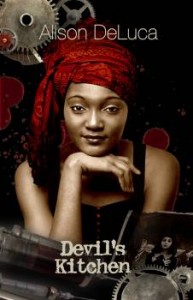 But what makes “Devil’s Kitchen” worth reading is the utter slog that the heroes endure to make it there. DeLuca has built a solid, interconnected, ugly underbelly to the glitter of steam and brass that everyone loves in neo-Victorian stories and settings. Labour houses, indentured service, an absolute vacuum of worker rights, this book has it all.Which is exactly how it should be. The main characters — intellectual Simon and plucky, irrepressible Miriam — are perfect characters for shocking the stuffing out of the civilized reader with what they encounter in the world of “Devil’s Kitchen”.

I will warn you, if you sit down to read “Devil’s Kitchen” you’ll need a bit of patience and time. I hadn’t read the first book in the series, “The Night Watchman Express”, when I got into “Devil’s Kitchen”. As a result, there was a bit of patience required to make it into the first chapter, learning the book’s “W5”. After that, the book cost me the rest of my evening and a bit of my night’s sleep as well, which is why I advise you’ll need a bit of time.It’s a fun read, from start to finish. Amusing hijinx, likeable Good Guys, despicable Bad Guys, interesting supporting characters and a richly colored setting make this book an enjoyable read.

DeLuca’s style of prose is an excellent compromise that avoids getting either unbearably distracting in it’s requirement for a thesaurus or being so simplistic as to be mindless. An intriguing prologue opens the book, and a satisfying epilogue closes it. All in all, I’m pleased to say it is an excellent addition to anyone’s library that enjoys a “tarnished-brass” Steampunk or a dystopian Neo-Victorian story.

An underground factory, a terrifying laboratory, and the eerie whistle of the Night Watchman Express…

Miriam has only her guardians’ son for company, and she and Simon dislike each other from the start. But they must find a way to trust each other, or they will end up on the sinister Night Watchman Express.

Full of danger, suspense, betrayal, and a hint of romance, this steampunk adventure is for readers of all ages.

In Book Two of The Crown Phoenix series, Miriam and Simon arrive at the terrifying destination known as Devil’s Kitchen.

There they will face human experiments in a laboratory known as The Infirmary.

There Miriam will be forced to work in an underground factory.

And their courage will be tested to the breaking point.

Lizzie and her beautiful sister Ninna are forced to work in a huge Manor and on a steamship to support their family.

They are caught up in several mysteries:

And Lizzie discovers that she has a strange, new ability.

She and her sister must discover the secrets of The Lamplighter’s Special before their enemy catches up with them.

Alison DeLuca grew up on an organic farm in Chester County, Pennsylvania. Her parents were British, so in the summers she went to stay with her grandparents near Dublin.

There was no stereo or TV there, so Alison, her sister, and her cousins spent the summer inventing stories and plays for each other. “This gave me the ability to entertain myself with my own imagination in any situation,” she says. “We used to be taken to tea with great-aunts, and we were expected to sit on an uncomfortable couch and not move or say a word. It was possible to endure it because I was watching my own little stories play out in my mind.”

After graduating from West Chester University, Alison became a teacher of English and Spanish, teaching students from kindergarten up to college level. She loved teaching, and it was with reluctance that she left the classroom to be a full time mom when her daughter was born.

While she was teaching and raising her daughter, Alison took every free minute she had to write. The Night Watchman Express and The Crown Phoenix Series were the result.

She is currently working on the final book in the series, as well as several other projects.

You can find Alison here: