What’s This About Storium?

Good question, and I’m afraid the answer isn’t too terribly short. If you are used to “play by email” (PBEM) role-playing games (RPGs), or are used to doing collaborative writing with one or two other authors, then Storium will be very familiar. On the other hand, if you are used to Collectable Card Game systems (CCGs) where you have cards with abilities that you play to defeat and / or neutralize an opponent, then Storium will also feel a bit familiar.

The problem is that’s its sort of both of those things at once, but not really either of them.

There is a Narrator, who is sort of — but not really — the “Game Master” for those familiar with RPGs. There are cards that you play to deal with the Obstacles that the Narrator puts in your path, or achieve the Goals that they put forward. All that said, you are not playing against the Narrator.

In fact, you could really argue that you aren’t playing against anyone in a Storium. Or anything. Beyond, perhaps, your own abilities as a creative writer.

I have a hard time calling them games, incidentally. They are all very fun, but they don’t really fit my mindset of “gaming”

That’s one of the things about Storium I like most, actually; the Narrator doesn’t get that much of a vote in how the story develops. I’m currently Narrating 3 “Storiums”. The Players really affect the story far more than I do. 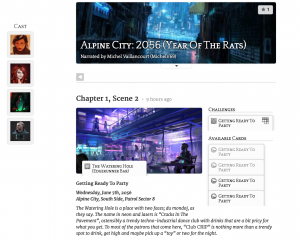 An example of a Storium “game” page.

I set the Scenes, the Goals, the Obstacles, and then I sit back and see what happens. The only way I directly impact a scene in progress is if the “Outcome” of an Obstacle is “Neutral”; neither “Strong” nor “Weak”, based on the cards played by the Players. 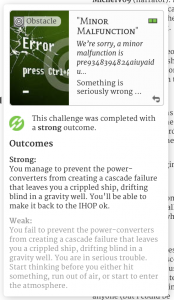 As the Narrator, when I establish the Obstacle I put a one or two line guideline saying what should happen on each of a Strong or Weak Outcome. The Player who plays the cards that “finish” the challenge writes what actually happens. I don’t.

That means that the bulk of the story is in the hands of the Players. As the Narrator, I’m much less a direct influence on the story than a traditional GM.

You could say the Narrator is more like a Stage Manager. Their job is to manage props and scene changes so the Actors have everything they need to improv their way through the scene.

Character growth or stagnation are key elements of any well-told story. As the character moves from scene to scene, we want our heroes to get better, learn something, rise above their own ignorances.

When the first scene opens, each character has a “three stack” each of Strength and Weakness cards, plus a Wild Card for each of those two categories. The Player can choose the right moment to re-write that Wild Card to move the story ahead and expose more of the deeper character. 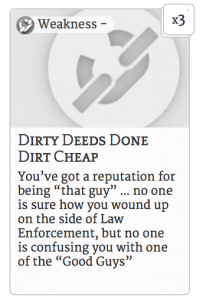 As you play through all your Strength and Weakness cards, you will eventually run out of them. At that point, you automatically get your cards back. The interesting “quirk” is that you can replace one of your “3 stack” with whatever you did for your Wild Card. If you go that route, then you get another blank Wild Card to replace the one that is now “permanent”.

So the character can stay a one-trick pony… Or grow.

Another mechanism for growth in the game is the Narrator creating Goals. These are “Neutral” cards that the Player can use as appropriate to help define the narrative of their character and what they are trying to achieve. Goal cards can be as simple or complex a concept as the Player and Narrator think makes sense for the current Chapter and Scene.

As the Player completes Goals in game by playing all the cards in a given stack for a given Goal. When they do, they are rewarded with another “Strength” Wild Card.

So, part of the brilliance of the Storium system is that being active and playing your hand not only gives you lots of screen time, but it also grows your character.

Banner for my “Duchy of the Mists” Storium

“Storiums” progress rather much like a good book. In the beginning, the characters are pretty simple and easy to understand when you meet them. As the story progresses, they then start pulling out progressively more varied and interesting tricks, as well as revealing complex flaws and weaknesses that drive the character.

This set of concepts means that it is possible to have very limited characters, or very well rounded characters right at the start of a new Storium. As a Narrator, I can “dope” the relative power level by playing couple of easily attainable goals, thus padding the decks of Players with “Strength” Wild Cards.

Since the Player deck only refreshes when they’ve played all of both the Strength and Weakness cards, having a couple more “Strength” Wild Cards in play means that more of the game scenes will end with “Strong Outcomes”.

Eventually, however, they are going to have to play those Weakness cards, and that in itself will define both the characters and the story in the face of adversity.

Another wonderful aspect of Storium is the visual element. Every card — Strength, Weakness, Asset, Goal, Obstacle, Place — can have custom artwork assigned to it by the Narrator or the Player. The best bit is that Protagonist Labs, the creators of Storium, smartly allow you to put the attribution for Internet-sourced images as a link right with the image.

Banner for my TNEC2199 Storium

So, this means that if you are using something beautiful from Deviant Art, for example, anyone reading along in the game can “click through” right to the original artist’s page. This is a fantastic design decision on the part of Protagonist Labs.

These images that are used on the various cards show up everywhere in the game, meaning that there are constant visual clues to the reader about what the characters are seeing, doing and feeling. With a picture being a thousand words, this incredibly smart component of the Storium experience allows a greater immersion in the story and world as it develops.

The net effect of all this, is that even with the same Narrator and the same setting and cards, every Storium will be different because of the players and how much impact they have on the story. The Strong / Neutral / Weak card mechanic empowers the Players at ever turn to drive in plot twists, explore conflicts, and dig into the emerging collaborative experience with both hands.

This means that there is no limit to the replayability of any Storium setting. Even if you were just to cut-and-paste your moves in from another similar Storium in the same setting … it’s pretty unlikely the other players would do the same, or the Narrator.

And this is just the Beta

Storium is currently in a buy-in-Beta. Normally, that’s a turn off for me, but after watching their Kickstarter video, I couldn’t get signed up fast enough. Since then, I’ve invited almost a dozen others to play in 3 Storiums I’m running — invitees join for free, which is a smart decision on the part of the Developers.

However, they literally have not got ½ the planned features and tools implemented at this stage. They are actively talking to the community; paying careful attention to the “Suggestion Box” and the forum posts to see how the Storium experience is unfolding for everyone.

As more and more cool features — including complete Storium settings by authors like Chuck Wendig, Keith Baker, Robin Laws, and Delilah S. Dawson — are released, I really do believe this will be the premier platform for interactive, collaborative fiction / role-play.

All in all, it’s a brilliant concept delivered in a smart and easy-to-use system. It’s a proper Web 2.0 platform, so it even “plays nice” on an older PC or low-power tablet.

There are already dozens if not hundreds of active Storiums that are open to read by current members. There are at least a dozen Storiums of just as many genres looking for Players. The $10 to get into the buy-in-Beta is worth it just for the quality of the stories you can read, even if you don’t join any of the stories as a player.

I am a long-time online role-player (RPer), starting back to the play-by-email (PBEM) games on dial-up bulletin board systems (BBSes), then moving to Internet play-by-IRC (PBIRC) games with channels of 10 to 50 players, then to massive multiplayer online RPG (MMORPG) systems like “EverQuest”, “City of Heroes”, “World of Warcraft”, and “Star Wars: The Old Republic”.

Now that I’ve played in and been Narrator in Storium, I can pretty much say that this is the system I’ve been looking for all along. Protagonist Labs has put this one out of the park, and petty much redefined the standard for collaborative fiction management and text based online RPG experience.