The cover you all have seen is this: 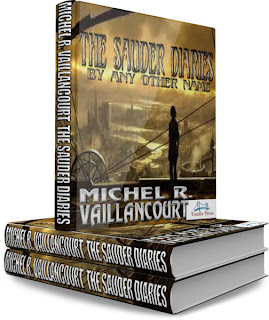 This is the original, used without permission of the artist:

When a fan alerted me to the issue, I instructed Trestle Press to contact Mr. Tomasz Jedruszek (AKA Morano) and obtain permission or arrange compensation. That’s the job of a publishing company for it’s writers, so I firmly told them to go do their job.

Trestle Press indicated that they had obtained their image from an intermediary website that indicated it was “free to use” and that they were unaware of the infringement.  They were apologetic to me for the huge problem this raised and said they would take action as I instructed.

He was extremely unhappy with the situation. I don’t blame him. This is what he does for a living, and he had someone steal his stock-in-trade from him. At that time, I put Trestle Press in direct contact with Mr. Jedruszek and gave Trestle Press stern instruction to unlist my works from Amazon and Barnes & Noble and to work with Mr. Jedruszek to remedy the issue to his satisfaction.

They broke it, they can fix it.

I wish to be completely clear on something… I did not intentionally steal Mr. Jedruszek (AKA Morano’s) work. I worked in a good-faith basis with my publisher, and they handed me stolen goods. I am the one who contacted Mr. Jedruszek to get this set right.

Mr. Jedruszek is a highly respected and talented artist. Go check out his website at http://www.morano.pl and take a look at some of the customers he has had. Sony, the “A Game of Thrones” MMO, Fantasy Flight Games and the Wizards of the Coast.

I am many things, but so incredibly stupid as to steal artwork from anyone, let alone a respected artist in the fantasy/ MMO community of which I am a part is not one of them. I’m a fan, and I have been for years. My wife is an artist and several of my friends are artists in a wide variety of media.

I do not and will not condone the theft of an artist’s work. I’m a storyteller; that ‘s my art. I know I wouldn’t want this happening to my stuff. I can completely understand why Mr. Jedruszek doesn’t want it happening to his.

My apologies to the Steampunk community and the greater art community and to Mr. Jedruszek. I am trying to get this fixed, a new cover produced with verifiably original art, and my first novel back out to its fans.

I’m not trying to screw anyone up or over. I’m just trying to chase a dream.

15 thoughts on “Taking Corrective Action and A Public Apology”