“…once you are Real you can’t become unreal again. It lasts for always.” — Skin Horse, “The Velveteen Rabit“

For those of us who recall the wonderful children’s story, the quest to become “real” is something that is a very tricky thing to manage for characters. Sometimes, a character that is planned to be “real” never quite makes it there in the eyes of the reader.

In other cases, a character who is really just a “prop” — walks in, delivers a few lines, then fading to plot obscurity — takes on a life of their own. They become “real” wether that’s what the author wanted or not.

“I am Doctor Alexi Koblinski; I have been the ship’s doctor for two years now. You will note I am in reasonably good health, beyond a damaged liver; that is the curse of life as a pirate.”

… with that opening quip, most of my readers in the Scribd release of Chapter 1 of “The Sauder Diaries” fell in love with the good doctor. Koblinski was never intended to be a permanent character in the initial development of the story. He had one purpose and one scene; be an authority figure that Hans could trust based on his Victorian upbringing. Thus, when Hans first meets Captain Blackheart, he has to accept Koblinski’s corraboration of the Captain’s story. After that, Koblinski really had no raison d’etre.

However, so many people loved the wise-cracking doctor that I decided I’d give him a spot in the second chapter.

“Because a fifty-eight calibre musket ball laterally through the fore-brain allowed few other options than for him to pursue a voyage to the afterlife,” Koblinski replied blandly.

… and after that point, there was no getting rid of the good doctor, from the perspective of the fans.

“He’s a lighthouse of wisdom, humor and sanity in what appears to be a sea of chaos, brutality and absurdity that is the circumstances of the Bloody Rose” — fan email 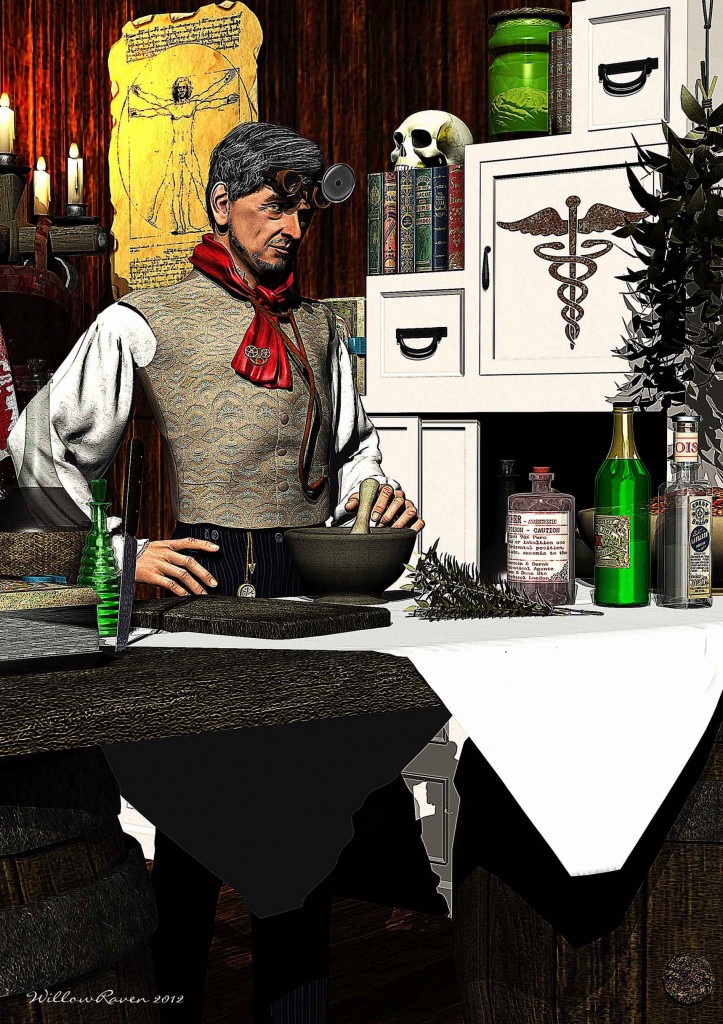 He’s turned out to be an incredibly valuable character to me as a writer. He is more than just the physician of the Bloody Rose. He has become their moral compass and father confessor. His own background — retrofitted into place after the fan response from Chapter 2 — clearly establishes him as someone for whom common sense, dry humor and simple action are key aspects of the way Koblinski deals with the unique circumstances of being a doctor aboard a pirate ship.

The other characters like and trust Koblinski, and so do the readers. In fact, I had one reader comment that in the first third of the book, Koblinski is a more likeable and trustworthy character than the protagonist, Hans Sauder.

Now that I’m well into the first draft of the second book, I can’t imagine the “Bloody Rose” without the good doctor aboard. He’s “real” for me, too.