As a recap, this is the fourth aquaponics system I’ve built.  The first one was a small, basement “mad science” project that was to prove to myself I could do this.  The second system was the greenhouse project which was to demonstrate that I could scale a system in a meaningful way.  The third system, still running currently, is another indoor system.  I really haven’t talked much about that one, mostly because I don’t like where it is at.  It’s really hard to get pictures or move around the system, so while it runs just fine, I haven’t been inspired to show it off.  That will likely change this fall when it gets temporarily shut down and moved to a much more “human-friendly” location. 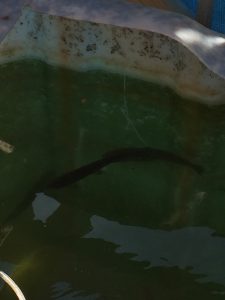 The fourth system is the one this series of blog posts is about.  It’s running right now, and I’ve been posting some YouTube video updates about it.  There are more than 25 rainbow trout in an IBC tank with 250USG / 1000L of water in it.  The idea with this series of posts is to give some greater detail about the build and get a bit gear-headed at times in a way that YouTube doesn’t feel comfortable for me to do.

Let me preface this build description by saying this is not free, nor even cheap, to build.  I’ve gotten lucky with some salvage and repurpose, bu generally speaking, I’m expecting the finish total on this system to be north of $600CAD, before fish and food.  However, fresh caught trout is going for more than $10CAD / kg right now, so if I can get three years out of the system, it will pay for itself on the fish, and any greens that come out of the system are bonus.

The over-all architecture is a bog-standard “Constant Height, One Pump” / “Pump In Sump Tank”, often called CHOP / PIST, design.  Water enters the fish tank, and flows via a Surface-Level Drain (SDL) system to the sump tank.  The SDL keeps the water in the fish tank at the same level all the time, plus or minus 20mm.  With the sump tank as the terminus of flow, we then pump the water above the level of the fish tank to return it. 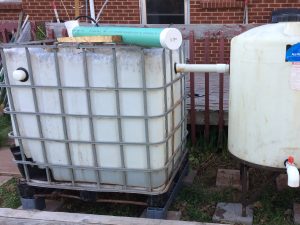 In greater detail, the system is built with three tanks running at gravity and level.  The left most tank is the 1200L / 275USG IBC being used as the fish tank.  It’s the same tank I used in the greenhouse build.  It has a “Solids Lift Overflow” (SLO) pipe which takes water from the bottom of the tank to the tank to the immediate right.