One question I’ve been asked is where the entire idea for The Sauder Diaries came from.  I was meeting a friend of mine from Vancouver for a few days in Ottawa in the late summer of 2010.  We  wanted to hang out and catch up while were both there on business.  She was into Steampunk and was complaining lightly that there was a complete absence of “Good Steampunk Fiction”.  Particularly, she noted that a certain amount of Victorian fiction was episodic, being published in periodicals of the day.  Very few, if anyone, was taking that line.  We talked a great deal, and she bought me a copy of Abney Park’s Aether Shanties album.

Once I was home, I listened to the music a lot and had a great time with it.  All other things aside, Abney Park does great music and captures both the showmanship and the spirit of both the Victorian and Steampunk domains.

One of the tracks is “Airship Pirate”, where the lyrics discuss some of the mechanics of the actual job of airship piracy.  For example:

I’m three miles up, we’re about to swing aboard

… my first thought was “what sort of lunatic swings on a leather thong at 15000 feet in the air?” 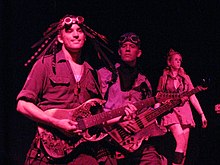 The clear solution to me was a man-portable weapon that would fire a small ball-and-chain and cut the tethers of the incoming boarders.   I love discussing and debating this sort of stuff with my darling wife and so we got into a pretty spirited problem solving session where we went back and forth trying to work out a “more reasonable” way to do airship piracy.

We discussed everything from airship design to tactics to economics.  By the time supper had come and gone, I had a page or so of notes worked out and was pretty content that what we had agreed to was “good enough for fanfic”.

About two days later, on my way to work in the pre-coffee morning hours, I was suddenly struck by an overwhelming curiosity about what the world itself would look like.  Why would you use airships in the sorts of numbers that would make piracy both viable and ignorable?  Who would the crew be?  What would their morals be like, compared to the pop-culture Victorian England?

I distinctly recall actually being annoyed, because I knew I was going to have to actually write a story to get this out of my head.  I opted to use Hans Sauder as a foil to discover the world;  both he, I and the reader were along for a ride of unknown duration, destination and consequence.

The concept of Hans using a diary to exonerate himself for his actions as a pirate was taken from the real world.  A WW-II German military commander did the same thing.  When he was tried at Nuremberg for war crimes, he read this diary as his defense.  He walked a free man.

The first chapter of “The Sauder Diaries” was released on Scribd after suggestion by friend, mentor and fellow author, Chantal Boudreau.  She had been using it as a great vehicle and thought that it would be a way for me to capture the “episodic Victorian fiction” feeling.  Each chapter would be released as it was done and fans could follow along and read in bite-chunks.

It worked brilliantly.  A lot of the feedback was from people who didn’t even know what Steampunk was, but loved the characters and the episodic feeling.  The combination of the Diary Entry written from Han’s perspective, combined with the subsequent “camera sees the Truth”, made for a very popular format.  At between 8k and 15k words per chapter initially, and then towards the end stretching to 18k, everyone found it was something they could keep up with on a lunch break or a “quickie” after supper or with the morning coffee.

I wasn’t convinced when I wrote Entry 1 that it would ever be more than Entry 1.  However, the response I got from my readers was so positive that I didn’t want to disappoint anyone by not writing Entry 2.  By the time I had written the “cannon ball through the wall” scene in Entry 3, Hans and the rest of the crew of the Bloody Rose was here to stay.